Public Institution “Ekoagros” is a non-profit, limited liability public institution, operating in the scope of certification and control of organic production, as well as products produced in compliance with national agricultural and food product quality system (NKP).

D – Processed agricultural products for use as food;

E – Processed agricultural products for use as feed;

In the year of 1996, professor Vida Marija Rutkovienė has started an initiative to create a new independent certification institution aimed at certifying organic products. A year later, on the 14th of March 1997, in Kaunas the first in Lithuania and the Baltic States certification body of organic products “Ekoagros” was established by the Ministry of Agriculture and the Ministry of Health of the Republic of Lithuania.

Establishment of the specialized certification body “Ekoagros” was necessary, aiming to assess the organic products being produced and to provide confidence for all stakeholders, ensuring compliance of products and the farming method with the determined requirements.

Further development of the institution:

Since 2005, PI “Ekoagros” is accredited by National Accreditation Bureau. The institution complies with the requirements of Standard LST EN ISO/IEC 17065:2012 and is accredited to certify the processes of organic crop production, animal husbandry, apiculture, wild plants and aquaculture, as well as handling and distribution of organic agricultural products, produced in compliance with national agricultural and food quality system. Accreditation certificate No. LA 03.007, issued by the National Accreditation Bureau on September 3, 2020. Accreditation is valid until 2025-09-02. 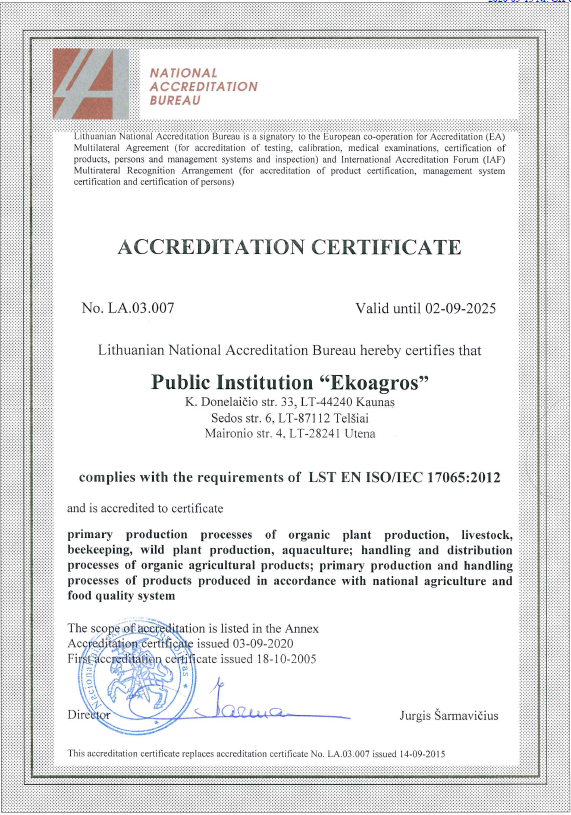 On January 23, 2017, the institution was accredited to certify organic production in compliance with the requirements of National Organic Program (NOP) of US Department of Agriculture.  The scope of certified operations is crop production, animal husbandry, processing and wild plants. Accreditation certificate No.NP6263PZA. Accreditation is valid until 2022-01-23.